His family, being around Rinko, jousting, justice and peace, honor

Those who threaten his family, being annoyed, evil

Zark Albatrosa (ザルク・アルバトロサ, Zaruku Arubatorosa?) is the young charismatic head of the Albatrosa Family and the deuteragonist of Tatsura vs. Hellbourne. He is the love interest of Rinko Akiyama and one of the most powerful members of the Justice Alliance who could transform into the great avian kaiju Zephyrus.

Zark is a tall slightly-muscle-bodied young man who has pale skin, spiked blonde hair and green irises on his eyes. He wears a green shirt with the Albatrosa family crest, couple with golden shoulder armor and bracelets, white gloves, bulky white pants and magenta belt. He also wears a light-green scarf, gold tiara with an emerald jewel and a green cape.

Zark is a wise and charismatic person who takes his duties and responsibilities as head of the Albatrosa clan seriously. Nevertheless, as a superhero and Justice Alliance member, he is selfless and kind to his friends and allies and willing to help anyone in any way he can. 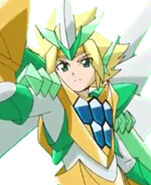 Retrieved from "https://mahou-kaiju-series.fandom.com/wiki/Zark_Albatrosa?oldid=4140"
Community content is available under CC-BY-SA unless otherwise noted.