Samurai Dragon Amatsu and the Lady in the Water

Zantetsu (?) was the White Hell Machine Musha Type-One, (白獄機巧武者一型, Shiro-goku Kikō Musha Ichi-gata?) the first of a series of giant mechs forged from the depths of Yomihara and one of the robots piloted by the prude Toukichirou Kinoshita.

A new Zantetsu was built in the period between the old one's destruction and the Battle of Kyoto where it was eventually deployed. In that battle, Toukichirou was furious because his key machine Hiyoshimaru was being piloted by Real instead of him, so seeing his other robot Zantetsu being deployed without him at the helm frustrated him further. Amatsu was overwhelmed by the combined efforts of Hiyoshimaru, Zantetsu and a platoon of Tanegashima's while Yakumo was keeping Senryuukaku busy. Amatsu soon collapsed and became injured to stand up. Muneichi Yazaki, who was piloting Zantetsu, requested that he be the one to finish off the samurai dragon which Real complies. Zantetsu marched towards the still-down Amatsu and placed the laser blade on the dragon's neck. But before the mecha could finish Amatsu off, Yukikaze, having learned of the infrastructure of Zantetsu thanks to interrogating Toukichirou, infiltrated the robot and destroyed the cockpit while fighting Yazaki. Taking advantage, Amatsu stood up, dealt severe damage on Zantetsu with his slashes and easily destroyed it, but not before Yukikaze escaped after firing an electric shot point-blank at Yazaki's stomach and making him explode.

Zantetsu was a robot that is built for melee combat.

Zantetsu was armed with a sword that emits an electric laser blade. 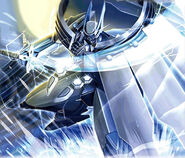 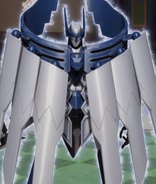 Fighting Kibatora
Add a photo to this gallery

Retrieved from "https://mahou-kaiju-series.fandom.com/wiki/Zantetsu?oldid=5839"
Community content is available under CC-BY-SA unless otherwise noted.