Its powers and abilities are derived from the robot's electromagnetic pulses running together from its five separate components combined into a powerful surge of energy, allowing Voltes V to perform excellent feats in kaiju combat.

Voltes V is armed with an array of weapons prepared at any time. 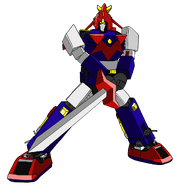 Add a photo to this gallery
Retrieved from "https://mahou-kaiju-series.fandom.com/wiki/Voltes_V?oldid=1324"
Community content is available under CC-BY-SA unless otherwise noted.