Her family, justice and order

Boundaries, evil ones, letting her family down

“Until Master comes of age, the Fuuma family assets are under my management.”
—Tokiko Fuuma

Tokiko Fuuma (ふうま 時子, Fūma Tokiko?) is one of the major characters introduced in the Kaiju World War movies as the older half-sister of Part 1’s protagonist Kotarou Fuuma.

Tokiko is beautiful fairly-heighted woman with sky-blue eyes and black hair. As a stewardess, she wears a black business suit.

Upon her birth, she was adopted by the family that had served as stewards of the Fuuma family for generations, and is a talented woman that is very skilled with her family's heirloom ability: Evil Eye.

When the Fuuma family was on the brink of destruction due to their war with the Taimanin, despite only being 11 at the time, she was able to make his younger half-brother Kotaro into the next head, become his guardian, and keep the family alive. She regards the restoration of the Fuuma family and its head as her mission.

She is a teacher in the Gosha Academy.

She is a very noble and respectful Taimanin whose only major concern is the restoration of the Fuuma clan after it was devastated many years ago. She shows deep caring for her half-brother Kotarou for she wants him to succeed as the new head of the family.

As his half-sister, Tokiko has supported Kotaro in his endeavors ever since the beginning. Though she is the most skilled in the family and fills in his position while he is in training, she calls him "master".

Tokiko is very gifted and capable in her abilities as a Taimanin, which are more than enough to turn the tide of battle into her and her allies' favor.

Tokiko's Evil Eye "Clairvoyance" (邪眼・千里眼, Jame: Senrigan?) allows her to separate her vision from her physical body and send it off to wherever she may choose, allowing her to essentially sneak into any location. Unlike other evil eyes, it's when her eyes are closed that she is able to activate her ability. Also, while her ability is in effect, by simply having her sight touch books, computers and so on, she can read the information contained within.

Although Tokiko herself doesn't seem to notice it, according to Kotarou, the Evil Eye "Clairvoyance" is what is called an astral projection ability. At any rate, Tokiko is able to make use of her Clairvoyance to see a person's "center of gravity", something only a master of close combat is generally able to do.

Rendered character art
Add a photo to this gallery 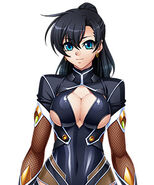 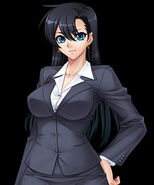 Tokiko as a stewardess
Add a photo to this gallery

Retrieved from "https://mahou-kaiju-series.fandom.com/wiki/Tokiko_Fuuma?oldid=4546"
Community content is available under CC-BY-SA unless otherwise noted.