His family and loved ones, justice, protecting the Magi, video games

His own weakness, people who harm his loved ones, chaos, injustice

“I am one with the wind.”
—Tatsurou

Tatsurou Akiyama (秋山 達郎, Akiyama Tatsurō?) is the main protagonist of Kaiju of Retribution Tatsura and Tatsura vs. Hellbourne, who plays a prominent role in the Mahou Kaiju Series, especially in the so-called Neo-Sengoku Trilogy. He is the younger brother of Rinko Akiyama, the boyfriend of Yukikaze Mizuki and has the ability to transform into the dragon kaiju Tatsura.

Tatsurou was a student in Gosha Academy, alongside his fellow classmate and childhood friend Yukikaze and elder sister third-year senior Rinko. Nicknamed the Gale Wind Taimanin (疾風の対魔忍, Hayate no Taimanin?) for his wind abilities, he is somewhat unpopular due to his shy and doormat-like personality and ineptitude to catch up with his fellow peers in terms of skill.

Tatsurou was sent by the Justice Alliance and teamed up with Ichirou Tachibana and Kousuke Sawaki in fighting in the Second Korean War, the crisis that was haunting the peace of the world.

Yukikaze is Tatsurou's childhood friend and eventually his girlfriend.

As Tatsurou's older sister, she shows utmost concern when it comes to the well-being of her brother.

After losing Yukikaze and Rinko in the original timeline, Tatsurou is mentored by his girlfriend's biological father, Yukimura Katsuki.

Wataru is Tatsurou and Yukikaze's son.

Prior to his training with the late Yukimura Katsuki, it is implied that Tatsurou's skills were sub-par with other Taimanin in his academy. Mostly, his abilities were more fitted for stealth than combat. After his training with Yukimura, he slowly hones plenty of his abilities to mastery and becomes a force to be reckoned with: a powerful ninja who lays retribution upon evil.

Tatsurou is armed with his signature sword called the Fuujigiri (風刀切?, Windblade), a silver katana with the length being 3/5 of an average person's height. However, the Fuurai is just a mask to its true form that he unlocks during his battle against the Dark Horror army: the Wind Wing Blade Doujigiri Yasutsuna (風翼刀・, Fūyokutō Dōjikiri Yasutsuna?). Sometimes, he would also use the Doujigiri simultaneously with the Flame Dragon Katana Onimaru, which he possesses after Yukimura's death. 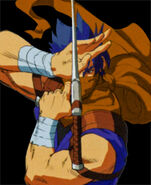 Retrieved from "https://mahou-kaiju-series.fandom.com/wiki/Tatsurou_Akiyama?oldid=6692"
Community content is available under CC-BY-SA unless otherwise noted.