Losing, being called weak, people who threaten his friends and family

Sokuren Tachibana (橘 速連, Tachibana Sokuren?) is a major character in the final arc of the Mahou Kaiju Series, first appearing in the film Gamera vs. MechaGamera, where he was born as the son of the series' protagonists Ichirou Tachibana and Lily Ramses Futaba, and becoming one of the main characters of the TV anime Young Braves Brigade.

Sokuren is a young boy with dark-purple hair and yellow irises on his eyes. He wears a black and orange jacket and light grey pants.

His battle armor is mainly glossy dark-magenta with blade-shaped wings on his back.

Sokuren is serious. He is also a sore loser, claiming that Kenta's victory over him was just luck. Although he gets easily excited about battles, he believes that only winning has meaning.

However, as time went on, Sokuren becomes remorseful of what he has done while being taken advantage of by the Asmodians.

Sokuren was born as the infant child of Ichirou Tachibana, the Grandmaster of the Justice Alliance and the Magi race, and his wife Lily Ramses Futaba. After his birth, their families, friends and the Alliance celebrated for such an occasion.

Character art from Kaiju World War: Parts 1 and 2
Add a photo to this gallery 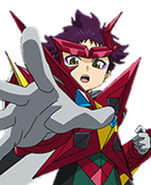 Retrieved from "https://mahou-kaiju-series.fandom.com/wiki/Sokuren_Tachibana?oldid=3343"
Community content is available under CC-BY-SA unless otherwise noted.