The Dark Grandwalker
The God of Evil

Master of the Underworld Legion

“Who's possessed? I am Aldrych!”
—Socradrych proclaims his new identity

Socradrych (ソクラドリッチ, Sokuradoricchi?) was the fusion of the Dark Lord Aldrych and Socrato, with the former's soul inhabiting and possessing the body of the latter.

Socradrych's personality is nearly entirely the same as Aldrych's, since he is the one who controls the fusion.

After Socrato was killed in helping Gamera and Daimajin to defeat Aldrych in the Battle of Tokyo, the Dark Lord's soul, desperate for a host, assimilated and inhabited his dying body, allowing both of them to survive into the present. As such, Socrato's soul remained dormant and his body became base for the current incarnation of Aldrych.

During the Babel War, Ichirou Tachibana, the Grandmaster of the Justice Alliance, was confused at the notion that Socrato didn't become a Grandwalker after his sacrifice, even though the other Grandwalkers in New Eden expected to welcome him as a new addition. It could mean that either Socrato was evil, a notion Ichiro outright dismissed, or his soul was captured by an evil force.

Aldrych previously revealed his true identity as Socrato to Ichirou during the Earth Defense Force's mission on Jerusalem. Ichirou was shaken in disbelief at this fact, and kept it a secret from his fellow Alliance superheroes until Aldrych personally revealed himself as Socrato to the team. Proclaiming himself to be the true Dark Lord and the one called the Dark Grandwalker (, Dāku Guranwōkā?) and transforming into his new form, Socradrych flew off and hinted to the heroes that they would meet again in the Underworld.

During the EDF and Skarrosan Pact's invasion of the Asmodian capital of Muorath, Socradrych sent the remaining armies loyal to him to face the Alliance superheroes and Taimanin leading the invasion. As Ichirou was trying to free Socrato from Aldrych's control, Socradrych used his dark mana to put him in a pocket dimension where there is no hope and evil has won. Once Ichiro was able to overcome any doubt he had in the illusion and notice the farce, he breaks out to where Socradrych was in disbelief of such luck. Then, Lily, Kousuke and Tatsurou arrived to help Ichirou and Sokuren fight Socradrych.

As the fusion of Socrato and Aldrych, Socradrych gains much more power than his separate components and utilizes many of their same abilities: 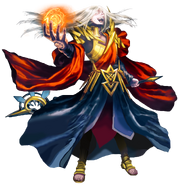 Laughing maniacally
Add a photo to this gallery

Retrieved from "https://mahou-kaiju-series.fandom.com/wiki/Socradrych?oldid=5562"
Community content is available under CC-BY-SA unless otherwise noted.