Descendant of the Snake God

Capturing girls and humiliating them

“There's no holding back this one.”
—Snake Lady

Snake Lady (スネークレディ, Sunēku Redi?), her real name being Kaliya (カリヤ, Kariya?), was a hermaphrodite Naga warrior and the main antagonist of the first season of The Taimanin Force.

Snake Lady is a sadist who smiles doing calm yet cruel things, despite her rather soft demeanor.

Kaliya is a notoriously powerful being from the Underworld and a descendant of the snake god. She is a member of a species of half-man and half-serpent creatures called the Naga. She is one of the executives of Edwin Black, with power comparable to him. Kaliya is also one of the three chiefs of the Naga race, along with Takshaka and Vasuki.

For some reason, she had a weird attachment to the Taimanin Asagi Igawa, so she kidnapped her younger sister Sakura to the Chaos Arena.

Snake Lady's powers and skills make her a very dangerous threat to the Taimanin.

In her civilian clothing
Add a photo to this gallery 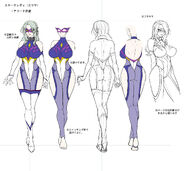 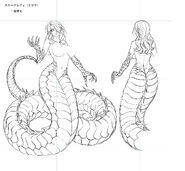 Naga form concept art
Add a photo to this gallery

Retrieved from "https://mahou-kaiju-series.fandom.com/wiki/Snake_Lady/Another_Universe?oldid=4576"
Community content is available under CC-BY-SA unless otherwise noted.