Descendant of the Snake God

Capturing girls and humiliating them

Being beaten, being held down by men

“Little girls are difficult to deal with, that's why it's so satisfying when I capture them.”
—Snake Lady

Kaliya (カリヤ, Kariya?), better known by her alias Snake Lady (スネークレディ, Sunēku Redi?), is one of Oboro's accomplices and a hermaphrodite warrior fighting within the Chaos Arena, first appearing as a villain in the film Anti-Demon Kaiju Taigaia.

Kaliya is a notoriously powerful being in the Underworld, as a descendant of the snake god and member of a species of half-man half-serpent creatures called the Naga. She is a close friend to Oboro and Edwin Black, with power comparable to the latter. Kaliya is also a popular warrior of Chaos Arena, working under the alias "Snake Lady".

Snake Lady's abilities, as demonstrated by her experience in Chaos Arena, make her a formidable and dangerous threat to the Taimanin.

In her lingerie, as seen in Anti-Demon Kaiju Taigaia

Character portrait from Kaiju World War: Part 2
Add a photo to this gallery 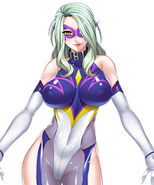 Retrieved from "https://mahou-kaiju-series.fandom.com/wiki/Snake_Lady?oldid=4573"
Community content is available under CC-BY-SA unless otherwise noted.