Over billion of years old

Peace and order in Laniakea, helping out other races, victory over evil

The Forbidden, chaos and evil, those who threaten Laniakea

“We believe that humans are capable of much more, Darkwurm.”
—Siegwurm-Nova

The Supernova Dragon Siegwurm-Nova (超神星龍ジークヴルム・ノヴァ, Chōshin Seiryū Jīkuvurumu-Nova?) is the great Dragon Star God of Light and one of two patron deities of the Superstar race and their planet Laniakea, alongside his dark counterpart Darkwurm-Nova.

Siegwurm-Nova is a huge bipedal dragon with crimson-red scales.

Siegwurm-Nova is a god of peace who prefers reasonable resolutions to conflict over violent conclusions, which is the opposite to Darkwurm-Nova's resolve. This is shown when he opposed Darkwurm's notion that Earth should be destroyed to end the Forbidden and eliminate the problem of Quasar Estes, believing there is another way to stop their enemies.

Concept art with open wings
Add a photo to this gallery 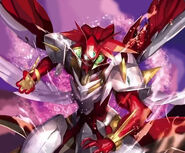 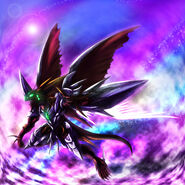 Head shot with Darkwurm-Nova
Add a photo to this gallery

Retrieved from "https://mahou-kaiju-series.fandom.com/wiki/Siegwurm-Nova?oldid=3503"
Community content is available under CC-BY-SA unless otherwise noted.