Justice, fighting alongside her friends, flowers

“Hey there, cutie, would you like to have fun?”
—Shizuru

Shizuru Kousaka (高坂 静流, Kōsaka Shizuru?) is a support character from the movie Tatsura vs. Hellbourne. Shizuru is a teacher at the Gosha Academy and a very skilled Taimanin in the field of infiltration, distraction and combat.

Shizuru is a youthful-looking adult woman with a voluptuous body, coupled with large breasts and wide hips. She has waist-long blonde hair tied into twin tails and green irises over her eyes. She has always glasses to show her status of intelligence.

Shizuru has a very casual and carefree personality that contrasts with her vast intelligence and her skills in the field of combat as a Taimanin. She is known for her bewitching charm, combined with her curvaceous figure, that captivates men and is one of the indispensable talents for infiltration missions.

Sometimes, she also gets carried away with her flirtatious attitude, such as when she seduces Tatsurou despite knowing he also has Yukikaze as his girlfriend.

Shizuru Kousaka works as a teacher in Gosha Academy. She is a talented woman who speaks six different languages, has two doctoral degrees and dozens of specialized fields of expertise.

Shizuru's specialty is her genius mind within the use of handicrafts and study of cases, which allows her to succeed in even some dangerous infiltration missions alone. 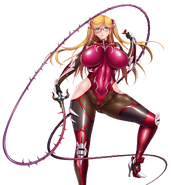 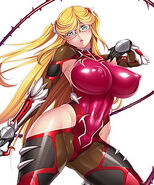 Retrieved from "https://mahou-kaiju-series.fandom.com/wiki/Shizuru_Kousaka?oldid=4156"
Community content is available under CC-BY-SA unless otherwise noted.