The Scorpio Spear Scorlance (天蠍騎槍スコルランス, Tenkatsukisō Sukoruransu?) is a part of the Underworld Legion forces' set of cursed weapons called the Satanic Arms. The dark weapon was wielded by the Egyptian scorpion goddess Serqet.

Scorlance is a massive dark-purple spear-like weapon. Its appearance is similar to that of Serket's Avatar form, from its spikes and hide to its claws.

Six-thousand years after her death at the hands of the Dark Lord Aldrych, Serqet was resurrected in the present day through the Orbs of Antares. Immediately after, Scorlance attached itself on the back of Serqet, which caused the goddess to lose her soul to the darkness with its curse and become an enemy of the Earth's forces.

Like Kanikiri, Sagittobow and Leo-Blaster of the Satanic Arms series of weapons, Scorlance has a curse that turns the possessor into a mindless monster hellbent on destroying everything in its way. It was forged with the curse specifically targeting beings who have the power of the Scorpio zodiac, an example being Serqet who would possess the weapon at the cost of her sanity. 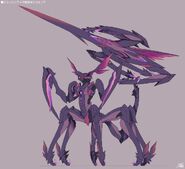 Concept art by Junya Ishigaki, including Dark Serqet
Add a photo to this gallery

Firing with Scorlance
Add a photo to this gallery

Retrieved from "https://mahou-kaiju-series.fandom.com/wiki/Scorlance?oldid=3764"
Community content is available under CC-BY-SA unless otherwise noted.