Having too much stuff to do, stupid people

“Shit, give me five more minutes. I mean hours. Let me sleep a bit more.”
—Sandrat

Sandrat Lemaire Gima (サンドラット・ルメール・ギマ, Sandoratto Rumēru Gima?) is a supporting character in the Mahou Kaiju Series, having debuted in Gamera vs. Gamera: Rise of Legion and appeared in subsequent films in the series after that, before landing the role of protagonist in the film Mouchuu: Little Kaiju of Pranks.

He is a man with a massive black afro, which conceals much of his face. He wears a grey shirt under a yellow top, bulky green pants and brown boots. He has a tattered brown cape and brown fingerless gloves.

As a French character, Sandrat's general character trait is based on the joke/stereotype that the French are cowardly, lazy and treacherous. Basically, he is notorious for being the laziest, most cowardly and most irresponsible superhero in the Mahou Kaiju Series. Before becoming part of the Justice Alliance, Sandrat only to use his newfound powers as a Magi to indulge himself in whatever he wants to do, if he is even interested in getting off his lazy ass. Because of this, he is not recruited but rather forced into the Brotherhood of Magi by Inui Takagi and later the Justice Alliance, so that he could learn how to use his abilities more responsibly and meaningfully. Even he may come off as a coward most of the time, he does some noble points and there are times when he has to help or do something right, mainly because he has to.

Interestingly, Sandrat's personality goes into a turning point in his own film Mouchuu: Little Kaiju of Pranks where the fate of Alfheim rests on his shoulders. As such, he is faced with such a heavy responsibility he never imagined he would have, even as a Justice Alliance member. Sandrat grows to become a bit more responsible and caring thanks to his experiences in Alfheim, most especially to his new love interest Lucie Menelumia, who always believes and trusts him no matter who he may be.

His responsibility is further challenged when he is given a baby boy to raise out of his parents' fear that an enemy would take advantage of it. So, he adopted the baby and named him Mei Merryhadda.

He is known in his superhero alias "The Trickster". 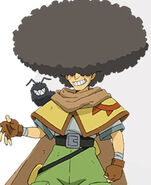 Retrieved from "https://mahou-kaiju-series.fandom.com/wiki/Sandrat_Gima?oldid=3046"
Community content is available under CC-BY-SA unless otherwise noted.