Human (resurrected as a demonic Magi)

Getting things he wanted, success, women

Defeat and failure, being opposed

“No one is innocent. No human, no demon, no one.”
—Sabato Kiryuu

Sabato Kiryuu (桐生 佐馬斗, Kiryū Sabato?) is the infamous "Devil's Doctor" (魔科医, Makai?) of Japan, known for his extreme experiments and operations on his patients across the country and becomes wanted for his intellect and dangerous acts. He first appeared as the main villain of the movie Senryuukaku vs. Mudou.

Character art from Senryuukaku vs. Mudou
Add a photo to this gallery 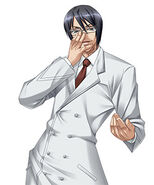 Retrieved from "https://mahou-kaiju-series.fandom.com/wiki/Sabato_Kiryuu?oldid=6625"
Community content is available under CC-BY-SA unless otherwise noted.