Excellence in her students

“I am Reiko Hasuma, an instructor in the Gosha Academy… Oh, it's you. What are you doing here?”
—Reiko

Reiko Hasuma (蓮魔 零子?) is a teacher in the Gosha Academy. She first appeared in Kaiju World War: Part 1.

Reiko is an aggressive and harshly strict woman who dislikes any form of disorder or disturbance, be it in her classroom or in the streets during her missions. Because her father was killed when she was young, Reiko becomes strict about compromising and spoiling others, and even more severely controlling herself. Her mercilessness towards her enemies in battle is somewhat emulated in her teaching efforts, since she resorts to giving harsh punishments to students who break rules and regulations or a cause a disturbance. Her demeanor makes some students scared to even make a move, fearing they might accidentally anger her. However, Reiko genuinely cares for and wants to make her students succeed and improve in becoming Taimanin. For this, students yearn for her fairness and always behave in a dignified manner whenever she's around.

At an early age, Reiko was strictly disciplined by her parents to be a skilled Taimanin. However, his father died during a mission because of a mistake. This incident would be the primary catalyst that eventually melded the young woman's mind into becoming the stern Taimanin who would take no nonsense and beat some sense into people if necessary. She becomes an active on-duty Taimanin, while also working as an instructor at the Gosha Academy. She has the ninja method of "seeing through objects", which allows her to find out the position and posture of a hidden opponent and beat them with a whip. Her fierceness was such at an extent that her name became known not only to the Taimanin but also to other organizations.

Even when teaching at the school, her cold attitude doesn't change, seeing the badness of a student with her see-through power. Some students are very scared because of the strict guidance. However, her strict guidance is due to her love for the students, so she will not blame them unreasonably or rebuke more than necessary. Her imposing attitude makes her a role model to many students in school, including Tomoe Kuroda. On Valentine's Day, girls would give her plenty of chocolates. She accepts them, but she does not forget to stab her nails and remind them by saying, "Don't forget your identity as a student and Taimanin."

As a Taimanin, Reiko has her skills that help her solidify her reputation: 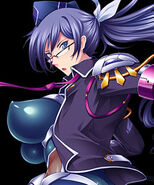 Retrieved from "https://mahou-kaiju-series.fandom.com/wiki/Reiko_Hasuma?oldid=3793"
Community content is available under CC-BY-SA unless otherwise noted.