“Welcome to the world of elves, Savior.”
—Nol

Nol (ノル, Noru?), her true name being Norn Alfheim (ノーン・アルフハイム, Nōn Arufuhaimu?), is a character introduced in Mouchuu: Little Kaiju of Pranks as the elder and leader of the elves in Alfheim.

Nol is a short-heighted elf with pointed ears, green eyes, thick dark-pink hair with twintails tied onto with black ribbons and magenta strips that barely conceal her body, only covering her nipples with heart-shaped appendages, her crotch, neck and part of her arms and legs. She wears a long magenta-and-yellow cloak with a huge hood and a turquoise jewel, as well as a pair of same-colored boots. She wields a wooden staff with yellow gems protruded at the top.

Her petite appearance can also change into a taller, more mature and voluptuous body with a huge pair of breasts and wide hips. Her cloak also becomes less fitting for her to wear as a result.

While being possessed by Hel, Nol's hair changes to dark-violet, her strips and cloak become black and her eye color turns into red. The yellow jewels on her staff change into red as well.

Fitting to her petite appearance, Nol has a very playful and cheerful personality that comes well with her squeaky child-like voice. A bit mischievous, she likes to flirt and mess around with Sandrat Gima and tease Lucie due to her infatuation with the magi human. She also has a short fuse, tending to get irritated at minor things almost easily, and always shouts and overreacts at minor inconveniences, like when Sandrat rescued and brought into her village Evelyn Celebrian, a dark elf, another race of elves whom Nol expressed great disdain against.

But because of her heavy responsibilities as chief elder of the elves in her village, Nol takes her decisions and the well-being of her people seriously, hating to see them get hurt or be disappointed in the shortcomings of Sandrat, who the elves see as their savior. In dire situations like when the Divine Tree of Alfheim began to lose its power, she would compose herself from being playful and focus on matters that are important to her and her people.

As the leader of the elves, Nol has incredible magical powers at her disposal.

When Hel possesses Nol, she gains the following powers: 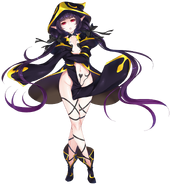 Corrupted form
Add a photo to this gallery 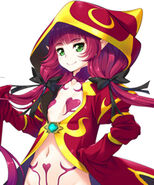 Nol is annoyed
Add a photo to this gallery

Retrieved from "https://mahou-kaiju-series.fandom.com/wiki/Nol?oldid=1917"
Community content is available under CC-BY-SA unless otherwise noted.