His family, justice, protecting the Magi

Fighting, being called weak, people who threaten his friends and family

Mei Merryhadda (メイ・メリーハッダ, Mei Merīhadda?), his true name being Mei Shirogane (白銀 命?), is a major character in the final arc of the Mahou Kaiju Series, first appearing in the film Kaiju World War: Part 1 as adopted son of Sandrat Gima and becoming one of the main characters of the TV anime Young Braves Brigade. It is soon revealed that his true parents are the Taimanin Ryuunosuke Shirogane and Sakura Igawa.

Mei is a short boy with white hair and blue eyes. In his civilian clothing, he wears a blue and black shirt with a mostly blue jacket over it. His pants are white and baggy, with a blue pattern. He wears a furry white hat.

Mei is quite naive and very trusting of others. He also dislikes fighting, and when he does, seems to dislike even using kaiju transformation powers that he inherited from his biological father. Despite this, Mei still feels a strong sense of justice by protecting his friends and Sandrat, his adoptive father.

At some time before Kaiju World War: Part 1, months after one point when Ryunosuke and Sakura had drunken sex in an unsafe day, she gave birth to their baby boy. However, after much thinking, they decided that they couldn't risk raising their child into their or Asagi's household at the possible danger that they could lose the baby to evil forces or worse corrupt him to fight them at their advantage. Sakura also couldn't take repeating the same mistake her sister did when she was in a relationship with Kyousuke, and they knew the only reason why their relationship endured was because they kept it a secret from everybody else. However, having a baby around would not only hinder their duties as Taimanin, but also endanger themselves including the child.

Therefore, the couple gave the away the boy to Sandrat Gima, explaining the situation they were forced to handle, and entrusted him to raise the baby. In return, Sandrat promised not to tell anyone about it. For the next few years, Sandrat would raise the boy, now named Mei Merryhadda, as if he was his very own son.

While still a child, Mei proves that he can be a competent fighter. 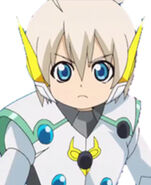 Retrieved from "https://mahou-kaiju-series.fandom.com/wiki/Mei_Merryhadda?oldid=3544"
Community content is available under CC-BY-SA unless otherwise noted.