Knight of the Vampire Queen
Marika the Grim Reaper

Serving Cara and her kingdom, Azuma(?)

Gram, People who threaten the queen or the kingdom, Azuma(?), skirts

Marika Krishna (マリカ・クリシュナ, Marika Kurishuna?) is the personal right-hand woman and leader of the Order of Assassin Knight to the Vampire Queen Cara Cromwell and one of the main characters of The Earth Defense Force.

Marika is a fairly-heighted slim woman with dark skin, grayish-blonde hair tied to her back, sky-blue eyes and a sapphire jewel embedded on her forehead.

A defining trait of Marika is her undying loyalty for her queen, Cara. She is willing to protect the Vladian Queen and her interests at all costs. To an extent, she also has a sense of fealty to the Kingdom and her people, since Cara's concerns are Marika's as well.

Marika can be described as a calm, serious, and collected individual that rarely expresses her emotions. While Marika is not anti-social, she can be a bit of an introvert and will express some discomfort when made the center of attention, likely due to her being raised to be an assassin. She finds the idea of wearing a skirt to be embarrassing. Despite being a very serious person, Marika does have a dry sense of humor, as she constantly make sarcastic remarks at Azuma's expense. Although it is due to her willingness to interact with the vampire hunter, even if it is just to insult her, does Cara suspects that Marika secretly has a fondness for Azuma.

As Cara Cromwell's right-hand knight, she is very loyal to her Queen to the point where she will even lay her life on the line for her glory. Marika has known Cara since they were young girls, due to Marika being the latest in a long line of knights that served Vlad's royal family. She is Cara's closest friend due to their long history together. Marika is very protective of Cara and would rarely leave her side. Cara, being the more laid-back and playful of the two, likes to tease Marika for her serious personality and often tries to get Marika to relax more. Cara also encourage Marika to be more social around people, particularity humans. Cara volunteer Marika to be a temporary professor at Hayato Academy and to attend some of the classes so she can interact with the students.

Marika has romantic feelings for her queen. She would show discomfort when the subject of Cara finding a future male eternal partner/mate and the vampire queen's future heir is brought up. In retrospect, her discomfort from the subjects is likely due to Marika herself being Cara's secret eternal partner, as Cara performed the soul binding ritual on Marika to save her life when she was poisoned by Gram. Although Marika have come to terms with her feelings toward her queen, she seem to insecure about actually being Cara's partner. Her insecurity seems to stem from Cara's performing something that was intended to be a marriage ritual to save her life, the fact that the ritual was suppose to be performed with someone of the opposite sex, that she would not be able to produce a heir with Cara due to both of them being women, and that they chose to keep engagement a secret for political reasons. Despite Marika's concerns, Cara does truly cares for and loves her knight. Cara would sometime covertly reassure Marika that she does not regret her choice, which leaves Marika with a satisfied smile.

Marika and Azuma quickly became rivals shortly after meeting each other due to their opposite personalities, their views on fighting, and Azuma's unintentional impolite manner of speaking towards Cara, which Cara herself doesn't mind. The two would frequently bicker with each other with Marika sarcastically insulting Azuma whenever she can. Marika often chastises Azuma for her aggressive behavior and hedonist habits. Sometimes their bickering would escalate to physical fights, usually initiated by Azuma. Despite their constant fighting, both Cara and Kitae believe Marika and Azuma secretly have a fondness for one another and a desire to be the other's friend, something that both Marika and Azuma would deny.

Despite Marika's denying having any fondness for the vampire hunter, she does respect Azuma's devotion to her students. When one of their physical fights accidentally endangers one of Azuma's students, Azuma respectfully ask that she and Marika settle their argument another time, which Marika concur. Marika even compares Azuma's love for her student to her own love for Cara. Additionally, Marika is willing to come to Azuma's aid should the vampire hunter ask for her help. 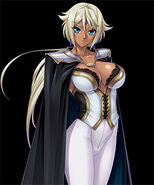 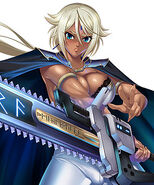 Retrieved from "https://mahou-kaiju-series.fandom.com/wiki/Marika_Krishna?oldid=4394"
Community content is available under CC-BY-SA unless otherwise noted.