Major (メイジャー, Meijā?) is an anti-hero who first appeared in the film Kaiju World War: Part 1.

She was a former United States Navy Special Forces under the code name "Major", with her real name unknown. She was once a subordinate of Danjou Fuuma. She tried to pull away Saika to the U.S. Forces to prevent information leaks, but she was forced to withdraw due to a confrontation with Tokiko. She was hypnotized and captured by Tokiko and Saika's Evil Eye. She was then confined in a basement for a while, but succeeded in jailbreaking with some guidance. She fled back to America where she would join the American division of the Earth Defense Force proper and become a member of the EDF-UFS Department of State Task Force "G".

Her main weapon is a baseball bat made of a special metal which even Major herself cannot dent. 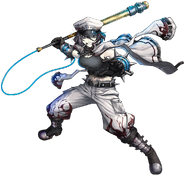 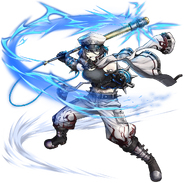 Powered up
Add a photo to this gallery

Retrieved from "https://mahou-kaiju-series.fandom.com/wiki/Major?oldid=6748"
Community content is available under CC-BY-SA unless otherwise noted.