Fascination on the human world, books, plants and animals, nature

War, conflict between the elves and dark elves

Sandrat: “After all I have done, even after knowing what I really am, why do you still care about me? I'm no savior or anything…”
Lucie: “It's because you're human. You're the one who told me that it's okay to make mistakes as long as you make up for it. Remember? I told you I will not leave you behind.”
—Lucie on why she still cares about Sandrat

Lucie Menelumia (ルーシェ・メネルミア, Rūshe Menerumia?) is one of the main characters of Mouchuu: Little Kaiju of Pranks, a loving and respectful elf from Alfheim and Sandrat Gima's main love interest.

She is a beautiful voluptuous-looking pointed-ear elf with waist-length blonde hair with shades of green on the lower part, and blue eyes. She wears two pink flowers with green leaves on her head.

Lucie has spent her life surrounded by birds and flowers, and thus has a kind personality and a gentle soul, because of this she troubles over the dispute between the elves and dark elves. She accepts Sandrat right away and enjoys hearing his stories of the human world, as her hobbies include reading and researching ancient documents. She is willing to accept Sandrat despite his flaws. 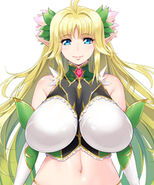 With other elves
Add a photo to this gallery

Retrieved from "https://mahou-kaiju-series.fandom.com/wiki/Lucie_Menelumia?oldid=4142"
Community content is available under CC-BY-SA unless otherwise noted.