Rie Kugimiya
Lily Ramses Futaba (双葉・リリー・ラムセス, Futaba Rirī Ramusesu?) is one of the main characters of Shin Gamera and a number of its sequels, and known throughout the Mahou Kaiju Series as the girlfriend and eventually wife of the series' protagonist Ichirou Tachibana.

Lily is a Japanese girl with a quarter Egyptian trace. Flat-chested, she has a fitting physique, matching well her tan skintone. She has orange hair, always coming in twin-tails tied by white and black ribbons, and sea teal eyes.

Her battle uniform is a leather semi-transparent bodysuit that only covers her torso and has white clothings that cover her breasts, crotch, sides and sleeves with yellow trimmings and pads near her shoulders. She always wears white heels with gold handles.

When she was at the age of ten, she was trained by Gouten Amagami to hone her naturally-born magical abilities. As a witch, she aspired to become the apprentice of Yuuko Morino, the current Witch of the Grand Oceans. During her first year in the Higashizaka Kitano High School in Kyoto, she attracted the attention of the entire student body because of her beauty, easily becoming the most popular girl in school. She had a boyfriend named Ryouki Yamagoto who mysteriously disappeared shortly after.

Lily is in her second year as the class president, in the same class as Ichirou Tachibana, as well as the student council president. She goes to school for one semester out of every two in a year, and spends the rest of the year in Egypt, as her grandmother was an Egyptian noblewoman.

At the end of the movie, Lily and Ichiro get married.

Gamera vs. The Great General of Darkness[edit | edit source]

Since she considers herself an Egyptian noblewoman, she tends to treat others, especially Ichiro, with contempt as a commoner. Up until the end of Shin Gamera, she was incredibly mean-spirited towards Ichiro, harming him physically and verbally. However, after the incident where she accidentally turned Ichiro into a tentacle monster, circumstances forced the two to work together out with the help of Yuuko and Socrato. As time passed, Lily and Ichiro were becoming warmer towards each other, with the instances of the former constantly changing her mood between hostile and friendly.

Lily is a tsundere, being friendly and soon deeply in love with Ichiro but not being able to admit it and getting very jealous when she sees him with other girls, especially her mentor Yuuko and Kaya Blanche. It was not helped when it was revealed that her ex-boyfriend Ryouki Yamagoto was actually alive, leading the Brotherhood of Magi during the events of Gamera vs. Gamera. After Ichiro and Lily promises to a dying Ryouki to remember him by becoming happy with each other, Lily decdies to stick with Ichiro until she finds out for sure how he feels about her. As a result, Lily learns to control her jealousy and from then on isn't nearly as bothered by Ichiro spending time with other girls as before.

Her nobility status is the reason behind her Tsundere nature, as her growing feelings for Ichiro were initially highly confusing and frustrating for her, due to seeing him as a "commoner". Through her relationship with Ichiro and continued interactions with Yuuko and Kaya throughout the Mahou Kaiju Series, however, Lily gradually outgrows this problem, and overall becomes a much kinder, gentler, friendlier, more generous, empathetic and moral person as a result of their influence. Evenutally, she is able to fully embrace her relationship with Ichiro to the point where they eventually married in the end of Gamera vs. the Goddamn Samurai. 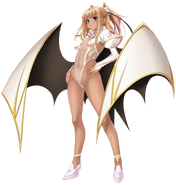 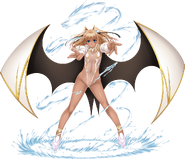 Using her powers
Add a photo to this gallery

Art from Gamera vs. Gamera: Rise of Legion with wings and symbol 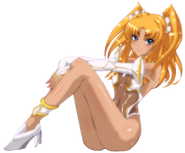 Character art from Gamera vs. The Great General of Darkness
Add a photo to this gallery 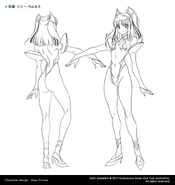 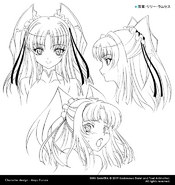 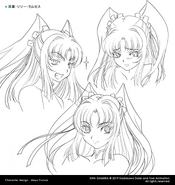 More head busts
Add a photo to this gallery 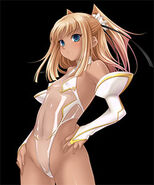 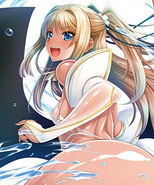 Confused
Add a photo to this gallery

Retrieved from "https://mahou-kaiju-series.fandom.com/wiki/Lily_Ramses_Futaba?oldid=5319"
Community content is available under CC-BY-SA unless otherwise noted.