Teasing Kenta (she kind of has a crush on him), playing pranks on her friends, comedy shows, pasta

“I don't care if I'm a 'flat sandwich', because I'm the one who will flatten you into a sandwich.”
—Lebe

Lebe Safree (レーベ・サフリー, Rēbe Safurī?) is one of the major supporting characters of the anime Young Braves Brigade, where she becomes a member of the eponymous superhero group. First appearing in a cameo appearance in the film Kaiju World War: Part 1, she is an optimistic youth who can transform into Sabrefra, her kaiju form.

She is an attractive petite young girl with short blonde hair, scarlet irises on her eyes and small breasts.

Lebe is an optimistic and mischievous young girl who is adventurous and very flirtatious with her classmate and crush Kenta Mogami. However, despite being cheerful, she can also be annoyed and comes of as grumpy when she is not in a good mood, especially whenever she gets insulted because of her flat chest. However, Kenta is the only one who is fine with it, commenting her small breasts as "delicious" and "cute", which often embarrasses and catches the girl off-guard.

Lebe is a transfer student from Norway who studies in the Osaka Tōin Junior High School in her first year. She is classmates with Kenta Mogami, whom she has a crush on.

As a member of the Brigade, she also fought alongside the Justice Alliance and the Taimanin a couple of time against Underworld Legion forces or the Oceanian despots. 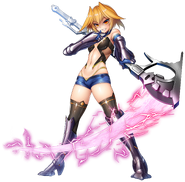 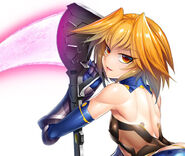 With her Saber Tooth scythe
Add a photo to this gallery

Retrieved from "https://mahou-kaiju-series.fandom.com/wiki/Lebe_Safree?oldid=3044"
Community content is available under CC-BY-SA unless otherwise noted.