Head of the Fuuma Clan
Missing Eye
The New Spectre

Hikaru Midorikawa
Kotaro Fuuma (ふうま 小太郎, Fūma Kotarō?) is one of the main characters of the final arc of the Mahou Kaiju Series, appearing as the main protagonist of Kaiju World War: Part 1 and one of the major characters of Part 2. He is the half-brother of Tokiko Fuuma, the leader of the Fuuma clan and head of the Fuuma Eight Generals that rule the family.

He would inherit the power of the Forbidden God Cthulhu and become the dimension-manipulating Metatrovorius.

He is a tall man who has a darker skin tone than his half-sister's, blue hair and a golden-brown iris on his left eye. His right eye is perpetually closed. Unlike other Taimanin, he has no combat uniform and often walks around in school uniform with blue tie, indigo jeans and brown leather shoes.

Kotaro is a free-loading delinquent who, at the start of Kaiju World War: Part 1, is initially self-absorbed and defiant. Although Tokiko is aiming at the revival of the Fuma family, he himself shows no interest in that at all, and lives freely according to his own whims. When it comes to his older half-sister who is also more or less a foster parent as well as his guardian and runs everything in regards to the family, Kotaro's greatest fears are that he will never become a worthy family head, and making her angry at him.

His hobby is reading any old Taimanin or Magi-related book that Gosha Academy is known to treasure. Every day he cuts class and reads such books underneath the shade of his favorite tree. In battle, his mannerisms turn into that of an intelligent military commander.

He is a member of the great shinobi clan of the Fuuma and a descendant of the legendary ninja Kotaro Fuuma from the Sengoku Era. His father, Danjou Fuuma, revolted against the Taimanin and was defeated by a young Asagi and Oboro and died. Kotaro, still only an infant at the time, was taken custody of by the similarly young Tokiko as his, the now Fuuma family's head, guardian and raised.

As the present head of the family, he had inherited the name "Kotarou", as his ancestors did throughout the generations. Although the main branch of the Fuuma family has produced Evil Eye users one after another, he himself had been unable to open his right eye from the time of his birth, and to this day has not awakened his Evil Eye's power. Due to this, he was scorned as "the unfit head of the family who is missing his eye."

In the Gosha Academy, Kotaro, along with his classmate Hebiko Aishu, sees Shikanosuke Uehara being pursued by a group of rebel Taimanin soldiers led by an accomplice of the Fuuma clan, Gaiza Nisha who has begun his assault on the school to claim his vengeance against the ones who nearly destroyed his family. He resents the fact that the Kotaro is the head of the family and yet doesn't have his Evil Eye ability. Gaiza attempts to kill the three but they escape from the school. After Kotaro notifies his half-sister Tokiko about the Gaiza and his subordinates' takeover the institution, he, Hebiko and Shikanosuke go into hiding while gathering new allies, facing different enemies and attempting to survive in a world torn by a concurring World War III.

While out on a recon mission near Tokyo, Kotaro encounters in abandoned warehouse the Necronomicon that Ryouki Yamagoto used over a decade prior. What Kotaro doesn't know is that the Necronomicon is alive and it was closed and buried itself for the reason of saving its energy. Taking no chances, the Necronomicon is instructed to absorb Kotaro himself. What happens next is unexpected: the Necronomicon, instead of simply absorbing the man, completely fused with him, giving him the power to transform into Cthulhu. As a result, Kotaro suffers from memory loss and cannot recall who he was. Since then, most of his allies strangely remember him as Kotaro, as he didn't have choice but to use it as his only name. After a while, he is joined in by not only the Taimanin but also the Justice Alliance and the Young Braves Brigade in preventing the Asmodian Empire and the Underworld's assault to Earth.

As the war against the Forbidden Gods progress, he and his allies are still struggling against their king Quasar Estes. From then on, Kotaro and Cthulhu would constantly struggle for control over his body. Eventually, Kotaro is taken to a dimension devoid of time and space, where the Spectre Ryouki Yamagoto, reveals that Cthulhu intended to fuse himself with the Fuuma head as one, like what it attempted to do to him back then, and similar to when Quasar Estes became one with Aldrych. However, Kotaro's will to survive is too strong and it prevents him from doing so. With the last of his strength, Cthulhu's essence is extinguished and Kotaro can now be able to fully control the Forbidden God's powers. Ryouki passes the title of the Spectre onto Kotaro, which, in return, awakens his Evil Eye power, the ultimate power of his new kaiju form, Metatrovorius. With his new Evil Eye, the Ain Soph Aur, which is accessed through Metatrovorius, he is able to wipe out Quasar from existence.

As a result, Kotaro decides to live for the future, instead of dwelling in the past. He would go on to fight against the mastermind of the Forbidden Gods, the extradimensional Final Gods, including El Millennium, Za Billennium, Ygso'Gurath, Quasarmageddon Chaos, and finally, Azathoth-Omega in which Metatrovorius, DaiAbarera, Seioura, Gamera and Grandeus all combine their powers to deal a final blow against the ultimate enemy.

Initially, Kotaro is not a man of combat, but he is able to make up his lack of combat experience with knowledge in battling in the front-lines.

By the end of the first act of Kaiju World War: Part 2, he had finally awakens his very own Evil Eye ability, in the form of the Super Evil Eye: Infinite Light (超邪眼・無限光, Chōjame: Mugenkō?), which was regarded by legend as a power that transcends beyond all other Evil Eyes; the most powerful ability that had yet to be awakened in any era. It can only be activated while in his kaiju form Metatrovorius as a means to execute his most powerful attack, the Ain Soph Aur. Kotaro opens his right eye to reveal the Eye of Cthulhu and he unleashes the true power of the Necronomicon through Metatrovorius. It is first used against Quasar Estes, which utterly destroys him.

Younger Kotaro
Add a photo to this gallery 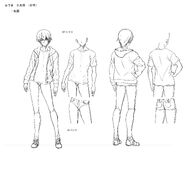 Retrieved from "https://mahou-kaiju-series.fandom.com/wiki/Kotaro_Fuuma?oldid=5818"
Community content is available under CC-BY-SA unless otherwise noted.