His family, friends and loved ones, courage, yakisoba and beef, basketball

Kenta Mogami (茂上 剣太, Mogami Kenta?) is one of the major characters of the Mahou Kaiju Series' Kaiju World War Arc, introduced as one of the founders of the superhero youth team Young Braves Brigade and one of the protagonists of the anime of the same name. He has the power to transform into the equine kaiju Exeseed.

Kenta is a boy in his early teens who has bluish-indigo eyes and spiked red hair, which he wears in a ponytail. He wears a white shirt with a yellow "S" on it, baggy blue shorts, a red short-sleeved jacket and white and red sneakers. Around his neck is a pair of white headphones.

Kenta is very childish. He gets excited easily, but constantly complains whenever he's not satisfied about something. This childish personality often clashes with Connor's more serious personality, causing the Japanese and American boys to get into fights. Like his brother, Shouto, and father, Kazuto, he is very passionate about basketball and would often get into long discussions about it with them, much to the annoyance of his sister, Minaki. He also tends to brag about the fact that he is a member and MVP of his champion team of Japan's national school tournament.

He also has dirty mind because of his childish mindset. This is shown whenever Kenta would comment about his crush-turned-girlfriend Lebe Safree's breasts as "delicious" and "cute", much to the annoyance of Lebe though she doesn't mind all that much.

The Norwegian girl Lebe is classmates with Kenta in their school and has a slight infatuation with the boy. Kenta also has a crush with Lebe but is too embarrassed to reveal until at some point after Lebe joins the Young Braves Brigades team, when he accidentally blurted out his feelings to the girl. 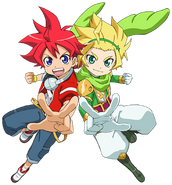 Kenta and Connor
Add a photo to this gallery 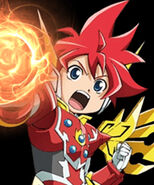 Cropped character portrait
Add a photo to this gallery

Retrieved from "https://mahou-kaiju-series.fandom.com/wiki/Kenta_Mogami?oldid=3338"
Community content is available under CC-BY-SA unless otherwise noted.