His family and friends, riding a motorcycle or a horse, exercise

“If I were to choose between Hell and listening to your bullshit, I think Hell wouldn't be such a bad place.”
—Kenichi

Kenichi Gou (剛 健一, Gō Kenichi?) is one of the main characters in the movie Voltes V: The Master Race. Once revered as a skilled veteran of the Moon War alongside his fellow teammates and members of the Voltes Team, a series of unfortunate and tragic accidents causes him to be framed for the murder of his own mother Mitsuyo Gou, Professor Hamaguchi and General Oka.

After a resurrected Oka threatens to destroy the world with the Protodaemons and the monstrosity known as Volto Spiritia, Kenichi is unleashed from prison, ironically tasked to commit the very same murder he was framed for. Filled with confusion and contempt for his former allies, his discovery of Voltes V and desire to carry out revenge leads him to discover the truth of his family, the Boazanians and the tragic incidents of the past, as well as the truth behind the Voltes itself.

Kenichi is a tall man with a slightly muscular body, dark-brown style hair with sideburns and green irises on his eyes. His pilot suit is the signature Voltes Team suit, his being a red-and-white jump suit with white gloves, a belt buckle and a giant yellow V on the torso.

Kenichi has a righteous heart believing in justice, yet maintains a fierce and aggressive disposition, seen best as he enthusiastically shouts his way into combat, which serves to level Kenichi closer to an ambiguous anti-hero than a noble one. Unfortunately, this tendency of letting his emotions get the better of him occasionally blinds Kenichi from seeing the greater goal; this also serves to contrast him with the methodical and stoic Ippei.

Indeed, immediately following his release from prison, Kenichi could think only of seeking revenge against General Oka, Ippei and even his own brothers, Daijirou and Hiyoshi, for deceiving and betraying him. This blinds him to such a great degree that he almost immediately holds Ippei at gun point following their strained reunion, and would've shot him in cold blood if not for the renewed invasion of the Boazanians.

Seemingly greater than his thirst for vengeance is his hate and even racism for aliens, such as the Boazanians and Protodaemons. After these two invading alien forces caused so much chaos that consumed his family, friends and allies, Kenichi was determined to bring every alien species into extinction. His violent evisceration of Jangal Rui and relentless attempts at assault towards the Protodaemons in Manila perfectly illustrate the level of contempt for them; not even the wailing humans imprisoned within the General Bergan's starship stop his brutal slaughter of them, and only the yelling of Hyouma snaps him out of the latter.

Yet even when the situation gets tense, Kenichi can be counted on to do the right thing and stand with his allies, and his discovery of the truth surrounding the Gou's, Oka and the Boazanians rekindles his bonds with the Voltes Team, solidifying him once more as an important ally.

Once close allies and battle hardened friends, the murders of Kenichi's mother, Mitsuyo, Professor Hamaguchi and General Oka and the apparent death of Megumi Oka shatter their relationship. Kenichi wanted to kill Ippei for being wrongly put in jail. Even after Ippei explained to Kenichi the plan that General Oka had Ippei participate in and the reasoning behind it, Kenichi was still distrustful of Ippei.

When Kenichi returns three years later, his resentment of Ippei seems to have faded away and even accepts Ippei's first refusal to pilot a newly-repaired and upgraded Voltes V sensing that Ippei had a plan he couldn't tell him.

Kenichi is a highly skilled pilot and fighter able to fight against multiple enemies with relative ease, even with serious injuries. He is also a highly valuable strategist able to find the weaknesses of an entire group of enemies. His skills in engineering are also great shown when he modified the original wrecked Voltman, the predecessor prototype to the Voltes V, into the Black Voltman as well as use its power source as a last ditch weapon. Kenichi has been shown to pilot almost any and all Voltes Machines showing a diverse skill set in the different systems and mechanics. 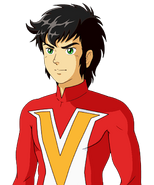 Character Portrait
Add a photo to this gallery

Retrieved from "https://mahou-kaiju-series.fandom.com/wiki/Kenichi_Gou?oldid=1889"
Community content is available under CC-BY-SA unless otherwise noted.