General of the Justice Alliance

Protecting the Magi, his family, justice in Japan, serving the Alliance

Those who harm the weak, crime and corruption

Inui Takagi (貴城 狗井, Takagi Inui?) is a character of the Mahou Kaiju Series who first appeared in the movie Gamera vs. Gamera: Rise of Legion before the main character of Stampede Kaiju Calamity-Boar.

Inui is a middle-aged overweight man who has black hair with a small tuft of yellow hair. His face is concealed by a large boar-like silver mask with red "eyes" and blue markings. He wears a yellow shirt under a grey vest and white pants with black boots. He also wears a blue cape.

In his first appearance in Gamera vs. Gamera, Inui thought highly of himself and disliked to be ordered around by another person that is not Ryouki. Inui was extremely loyal to him and was willing to endanger himself to protect Ryouki, not to mention always striving to do something useful for him.

Since the events of Stampede Kaiju Calamity-Boar, he adopts a chivalrous personality to protect not only Ichirou but also innocent people and punish evildoers justly, after swearing fealty to the new Grandmaster of the Magi.

After Ryouki's death, Inui swears loyalty to Ichiro Tachibana, whom he thought is a worthy successor to his former master all along.

As leader of the Brotherhood of Magi, Ryouki was Inui's superior and master.

During his time in the Brotherhood of Magi, he didn't share his secret to his wife Ayame and son Shu. 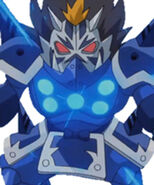 Add a photo to this gallery
Retrieved from "https://mahou-kaiju-series.fandom.com/wiki/Inui_Takagi?oldid=2055"
Community content is available under CC-BY-SA unless otherwise noted.