Ingrid (イングリッド, Inguriddo?) is a lovely and stern Hell Knight (魔界騎士, Makai Kishi?) demon-hunter who fights under the command of Edwin Black in Tokyo. She first appears as an anti-heroine in Senryuukaku vs. Mudou, becoming a character who often switches between antihero and villain across the Mahou Kaiju Series.

Ingrid is a very sexy and beautiful woman with dark brown skin, huge boobs, very long pink curtained hair and yellow irises on her eyes. She also purple lipstick on her lips and a mole on the right side of her face near her lower lip.

While she is Edwin's right-hand woman and one of his most loyal aides, she fights merely to fight whatever disrupts order in the city of Tokyo and despises people who hurt or manipulate others.

Ingrid was a member of a secret organization of humans that was allied with the demons. She was known as the Dark Knight. Under the command of Edwin Black, Ingrid was assigned to capture the Taimanin Murasaki Yatsu. However the scientist Sabato Kiryuu had revealed he already abducted her. She had already suspected Kiryuu to be a traitor and was just using Black's organization to fulfill his vengeance.

Gamera vs. the Goddamn Samurai Edit 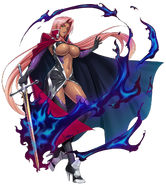 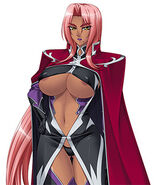 Portrait from Taigaia vs. Senryuukaku
Add a photo to this gallery 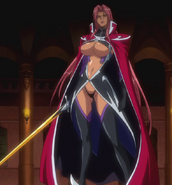 Ingrid in her Hell Knight Outfit

Ingrid in her civilian outfit

Retrieved from "https://mahou-kaiju-series.fandom.com/wiki/Ingrid?oldid=4414"
Community content is available under CC-BY-SA unless otherwise noted.