Student (until Gamera vs. Gamera)
Marine Biologist
Supreme Commander of the Justice Alliance

His family, his harem, justice, protecting the Magi and the world, video games, revealing truths

Yuichi Nakamura
Ichirou Tachibana (橘 壱郎, Tachibana Ichirō?) is the main protagonist of Shin Gamera and many of its sequels and a supporting character of several movies, as well as one of the leading characters and arguably the main protagonist of the Mahou Kaiju Series. He is the Supreme Commander of the Justice Alliance, a massive organization of superheroes tasked to enforce justice and protect the innocents, and is known to transform into the powerful guardian kaiju Gamera. Due to his feats and accomplishments in many battles and wars for over a decade, he is widely regarded as one of the greatest heroes on Earth.

Ichiro is a tall man who has blue eyes and black hair with a curved antenna at the top. A lot of times, he wears a red shirt, brown pants and white shoes as his civilian clothing. In later movies, he would develop a slightly-muscular build on his body.

In his battle attire, he wears golden crown with a white gem on his head, a gray skin-tight clothing with white accents that covers most of his body, a white chest armor with golden spikes and accents and a blue gem, white gauntlets and boots with different colored jewels, a big collar and a long flowing cape. From Gamera vs. The Great General of Darkness onwards, his uniform is now mostly black.

Ichirou was born from two unknown parents who died in an unknown accident when the boy was only two years old. (It is revealed in Shin Gamera that Ichirou's parents were actually killed by a Gyaos and their bodies were never found because they were eaten.) As a result, with no other nearby relatives to stay with, he lived with his grandmother, Mai Tachibana, for eight years in her house until she passed away too. Ever since then, living alone in his late grandmother's home, even with insurance money left for him after Mai died, his young life spiraled down for the worse. During his first year as a student in the Higashizaka Kitano High School in Kyoto, Ichirou was constantly and harshly bullied because he was lonely and his parents, as well as his grandmother, were dead. One day, Ichirou attempted to commit suicide and slit his wrists in a school comfort room. Discovered by authorities, he was rushed to the hospital, healed and made it out alive. That incident made Ichirou resent his entire life as nothing more than a scapegoat by bullies and "a sad excuse for a human being's existence with no goal whatsoever". But his tortured mindset may change for the better.

His child with Lily, Sokuren Tachibana, is born.

Gamera vs. The Great General of Darkness[edit | edit source]

Ichirou seemingly has the mindset of an average high school boy student, being arrogant, easily annoyed and self-centered at times, even acting like a delinquent or pervert, but in reality, he is actually less fortunate.

Before the events of Shin Gamera, he felt overwhelming loneliness after his loving and caring grandmother passed away, not helping the fact that his parents were long gone before. He was depressed and mentally tortured by the harsh bullyings given against him when he was just in his first year in high school. At the time, he was suicidal and resented the world and his own life for being too cruel against him. During the events of Shin Gamera, with the help of Lily, Yuuko and Socrato, he is able to show more of his kind, loving and compassionate side and let go of his horrible past to move on and look forward to the future. After the movie's events, he becomes even more serious with his newfound responsibilities as the Grandmaster of the Magi people and Socrato's successor.

He is one who is willing to help everyone, even his loved ones, in any way he could. Despite his bumbling nature from his high school past taking over himself at some times, Ichiro grows to become kinder, more loving and more compassionate towards others, to the point where he even wants to raise a family with Lily after marrying her and trusting her father, Shougo Futaba, with the position as acting Chief of the Justice Alliance.

Lily is undoubtedly the closest person Ichirou ever had in his life, always staying by his side whenever he feels down. As a couple who would be married as years pass, they love each other and often stay side by side for each other's devotion.

As the Goddamn Samurai, Jin displays abilities that are even of the same footing to that of the powerful sorcerer Ichirou. As a result, he and Jin recognize each other as equals and become close friends.

Even as Lily's ex-boyfriend and his rival who shows resent to mankind, Ichirou respects Ryouki.

He does not know about his long-lost cousin Rikurou until he formed the Justice Alliance.

Sokuren is Ichirou and Lily's son. 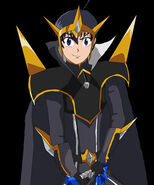 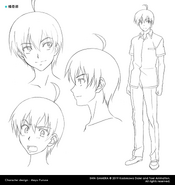 Concept art by Mayu Furuse
Add a photo to this gallery

Observing a signing of the Articles
Add a photo to this gallery
Retrieved from "https://mahou-kaiju-series.fandom.com/wiki/Ichirou_Tachibana?oldid=5480"
Community content is available under CC-BY-SA unless otherwise noted.