His friends, his wife (Chizuru), riding on a motorcycle, going fast

Hyouma Aoi (葵 豹馬, Aoi Hyōma?) is the main protagonist of the anime All-Star Combattler V. He is the leader of the Combattler Team and the pilot of the Battle Jet, which forms the head of the super robot Combattler V.

Hyouma is a handsome-looking man with a well-shaped physique, reddish-brown eyes and brownish-red spiky hair. His pilot outfit is a red bodysuit with dark-brown sleeves, blue belt buckle, white boots and gloves and a giant yellow "V" marked on the torso.

Hyouma is an energetic and hot-blooded young man. Despite being extremely impulsive and impatient at times, he is willing to understand the feelings and concern of other people. He also cares about the well-being of those around him and those who care for him, especially Chizuru Nanbara, whom he loves passionately. Hyouma is very serious when it comes to justice, when he berates Sandrat for his laziness. 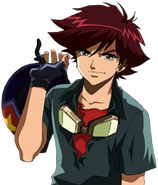 Retrieved from "https://mahou-kaiju-series.fandom.com/wiki/Hyouma_Aoi?oldid=2038"
Community content is available under CC-BY-SA unless otherwise noted.