Peace and quiet, taking care of the birds

Evil beings or those who harm her friends, loud noises

“I will definitely protect everyone!”
—Hisui

Hisui Yuri (由利 翡翠?) is one of the many Taimanin characters who appeared in the Kaiju World War Saga.

Hisui is a very shy and quiet woman who is skilled in battle and takes responsibility in her duties. Other than her duties, there is a gap between her training and missions in which she is very inactive and reserved. However, when it comes to fighting, she takes advantage of the characteristics of a ninja and shows a surprisingly obsessive and competent fighting prowess.

She has very few friends to get along with from that gap, and basically, she is often alone. However, she doesn't hate people at all, she is a strong type of friend, and she likes to sing. She wants to protect everyone in any way she can. She is violent though against enemies and those who hurt her friends and does not show any mercy. Although she lives a very simple life and does not mention her hobbies, her daily routine is to play with the birds she feeds.

Hisui is a Taimanin, mainly in charge of battle duties on the front line.

As a Taimanin, Hisui has her skills that she can make great use in her fights: 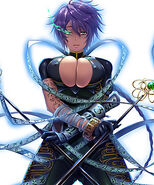 Retrieved from "https://mahou-kaiju-series.fandom.com/wiki/Hisui_Yuri?oldid=3801"
Community content is available under CC-BY-SA unless otherwise noted.