Being made fun of (especially her height), eating seafood

“Hey, this is Hebiko Aishu~. Nice to be at your service♪ Well, what now? Oh, well, let's go together!”
—Hebiko

She is a first-year student in the Gosha Academy. She is a beast-style jutsu user; particularly prominent amongst them are those known as "Beast Change Shinobi", Taimanin who keep beastly power within their very bodies as a sort of superwoman system of ninja art. And her beast change type is "Devilfish", in other words, she turns into an octopus. According to Kotarou Fuuma, she's an incomprehensible woman whose name is Hebiko, but she turns into an octopus. Hebiko's rebuttal to this is that she inherited the name from her grandmother, who apparently was able to beast change into a large snake, supposedly. She's a part of a low-ranking family that has served the Fuuma family for generations, thus she always tries to look after him in her own way.

Hebiko is famous in the academy for being able to turn into an octopus and firing ink, and there's the fear that if hit with that ink, a person will be unable to get it off for three days and three nights, during which will be stuck smelling horrible. When she changes into an octopus, both of her legs become octopus legs. That being said, they don't become multiple octopus legs, each leg simply turns into one large octopus leg. Thanks to their incredible elasticity, it's possible for them to extend up to a maximum length of 30 meters, and if cut they can be immediately regenerated. Her favored weapons are ninja short swords, in the four-sword style (which she wields by using both hands and both feet while in octopus form).

After Gaiza's takeover of the academy, she, Kotaro and Shikanosuke escape from the vicinity and inform Asagi of the incident.

She is also somewhat of a klutz. She is also sensitive about her physical appearance, since she proclaims herself to be 150cm tall. Worse, if one were to correct her and tell her that she's actually 149cm, or pretty much anything that annoys her, she would shoot her ink breath at them in anger.

Hebiko has abilities that can come quite handy for her in times of trouble or inconvenience. 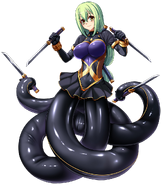 In school uniform
Add a photo to this gallery 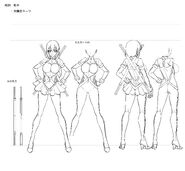 Head Concept Art by Kagami
Add a photo to this gallery 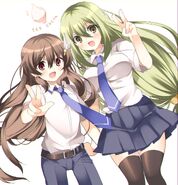 Fanart by 赤福ぷこエモン
Add a photo to this gallery

Retrieved from "https://mahou-kaiju-series.fandom.com/wiki/Hebiko_Aishu?oldid=4317"
Community content is available under CC-BY-SA unless otherwise noted.