Gosha Academy (五車学園, Gosha Gakuen?) is the headquarters of the heroic ninjas called the Taimanin, established by their superior leader Asagi Igawa, and the school that trains a younger generation of Taimanin to prepare for the battles ahead. It is introduced in Kaiju of Retribution Tatsura and became the key location of the Taimanin characters in the Mahou Kaiju Series since.

The school also has its own stadium. 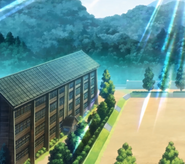 Retrieved from "https://mahou-kaiju-series.fandom.com/wiki/Gosha_Academy?oldid=4460"
Community content is available under CC-BY-SA unless otherwise noted.