Justice, keeping peace and order in the streets, his friends in the Justice Alliance, birds

“What are you, dense? Are you retarded or something? Who the hell do you think I am?! I'm the Goddamn Samurai!”
—Jin Yuugami, as the Samurai

Jin Yuugami (夕神 迅, Yūgami Jin?) is one of the prominent major characters in the Mahou Kaiju Series. Though his first appearance is in Shin Gamera where he is introduced as a lawyer and Japan's Resource Committee Chairman, he would play a more important role in the series after he officially debuted as his dark superhero alter-ego The Goddamn Samurai (死神の侍, Shinigami no Samurai?) in the film of the same name.

Jin is a tall muscular man with a sinister-looking appearance to reflect his dark superhero identity that nobody outside of the Justice Alliance knows about. He has long black hair with a patch of white on the front right, and is tied on his back as a ponytail. He has two vertical scars below his eyes. His lawyer attire is a white polo and tie underneath a dark-blue long-sleeved suit with yellow buttons, coupled with the same-colored pants, black belt and boots. He also wears a long black-and-white collared vest with the Yuugami family crest on it.

As the Goddamn Samurai, his attire is entirely black. Its armored parts underneath his black clothed bodysuit are on the torso with decorated abs and his superhero symbol on the chest, gauntlets with three protruded spikes on each, gloves, thighs, knee-pads and boots that also have three spikes on the back. He wears a utility belt with a golden handle on the center and several pouches and accessories on the sides. It is also has a long flowing cape. His head gear is a samurai helmet with silver horns, a golden four-pointed star on the forehead portion, chin guard and visors to cover his eyes to make it entirely white on the outside. The only parts that aren't concealed are his lower face.

Jin is known for his use of psychological manipulation in battle. Outside of his excellent use of martial arts, swordsmanship and marksmanship, among his tricks are flattery, suggestive persuasion, and implicit death threats. The latter especially comes in various forms, but one of his favorites is his use of iaijutsu with his fingers, causing a "slicing" effect that has been seen to slice a feather in half, and was even able to cut off a piece of Kousuke's hair. Although these threats are usually idle, they are part of a larger persona that he has built for himself, based off of his reputation as a orphan from a rich family living in a cruel place and period. This allows him to instill fear and uneasiness in others, especially towards criminals, the same kin that killed his parents and the ones that he has great hatred against.

A highly disciplined and focused man, Jin was capable of hiding his secret identity as the Goddamn Samurai from the public for a very long time. Several years of training and living in a dark persona fighting crime for many years even withstood or evaded several attacks by the Great Marshall of Hell without skipping a beat. However, underneath his somewhat intimidating appearance and his brutal acts is a kind, lawful man who is willing to help the helpless and weak and refuses to kill even after beating criminals with every inch of their lives.

Despite his rivalry with her, he deeply cares about Ingrid, to the point of maintaining his guilt to the bitter end in order to protect her and keep Barde Barde guessing. However, despite caring about and believing in her, Jin isn't adverse to teasing Ingrid about her skill level and allegiance with Edwin Black. He also doesn't indulge in her occasional moments where her lack of confidence gets the better of her, preferring to instead make a good-natured snarky comment or directly telling her to pull herself together.

Jin has a dark and somewhat mischievous sense of humor that he mixes in with his intimidation tactics. He often tells larger-than-life stories of prisoners he has met in the Tokyo Asylum, such as a surgeon or a captured ninja, usually to make a point. He also gives unflattering nicknames to just about everyone other than his fellow allies in the Justice Alliance, whom he addresses using the Japanese honorific "-dono". However, he has little patience for what he perceives as ridiculous, refusing to let Kousuke and Ryuunosuke head to the dangerous Tokyo Kingdom while claiming he will save Asagi and Sakura Igawa on his own, only to very reluctantly allow them to, and even leaving the Justice Alliance meeting room after one of the superheroes gave a testimony he deemed "rubbish".

His pet hawk Taka plays many roles for him. As part of the Samurai's intimidation game, he sics Taka on allies and villains alike whom he perceives to be lying, cheating, annoying him, or otherwise obstructing the proceedings. Taka is also used to deliver evidence to other parties and keep the phantom's psychological profile safe. Jin appears to like birds in general, stating that he believes that penguins are the top attraction at aquariums, and becoming angry when someone belittled Rifle the penguin.

He seemed to have a low initial opinion of the Taimanins. However, the Samurai seems to have changed his mind in the aftermath of the Great Marshall of Hell's death, as he would go on to approach the Taimanin for Ryuunosuke's help in finding Sakura.

When Jin was 8 years old, after he and his parents, Takeru and Madoka Yuugami, finished watching The Last Samurai in a theater, they came across a strange dark alleyway where they encountered a robber. They tried to escape from the robber, but he shot Takeru and Madoka dead and ran off when he heard the police sirens before he could shoot Jin, leaving the child to deal with the death of his parents alone.

Jin dons the superhero/vigilante identity of the Goddamn Samurai to combat crime plaguing Tokyo and warding off the same kind of injustices that dragged him down to who he now became. He becomes a close ally of the Taimanins after helping Kousuke Sawaki and Ryuunosuke Shirogane in their quests.

Gamera vs. the Goddamn Samurai Edit

He eventually joins the Justice Alliance of Japan, becoming renowned as the only member of the team who doesn't have superpowers but is still a very competent and skilled fighter. Even so, the Samurai is much stronger and more skilled than many super-powered members of the Alliance. He earns the friendship and truth of both Ichiro Tachibana and his fiancee Lily Ramses Futaba, who soon become two of his closest and greatest allies.

After the defeat of Iris, Jin attends the wedding of Ichiro and Lily, playing the role of the former's best man.

The Samurai, while lacking supernatural abilities and power since he is not born from the Magi species like most of the members of the Justice Alliance, is very profound and skilled in combat and makes up his lack of superpowers with his mastery on martial arts, weaponry and even gadgetry that he invented.

Vs. the Final Gods Edit 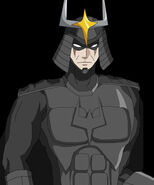 Retrieved from "https://mahou-kaiju-series.fandom.com/wiki/Goddamn_Samurai?oldid=3337"
Community content is available under CC-BY-SA unless otherwise noted.