Felicia (フエリシア, Ferishia?) is the secondary antagonist of Kaiju of Shadows Kurobare and the archenemy of the Taimanin Kurenai Shinganji. 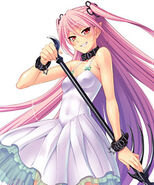 Portrait from Kaiju World War Parts 1 and 2
Add a photo to this gallery
Retrieved from "https://mahou-kaiju-series.fandom.com/wiki/Felicia?oldid=2029"
Community content is available under CC-BY-SA unless otherwise noted.