Member of the Freedom Fighters of America

His friends, freedom (also for his people, but mostly his own), action movies, tuna

Criminals, cops (for the most part), gangsters, spinach

Ethan Radcliffe (イーサン・ラドクリフ, Īsan Radokurifu?) is one of the members of the superhero group Freedom Fighters from the anime Justice Alliance of Japan, known by his superhero alias Black Hawk. (ブラックホーク, Burakkuhōku?)

Ethan is a tall muscular man with a very dark-brown skin tone, to match his ethnicity as a black American, brown eyes and black mohawk-style hair.

Ethan Radcliffe is an African-American born in the United States city of Los Angeles, California. 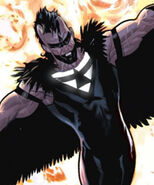 As Black Hawk
Add a photo to this gallery

Retrieved from "https://mahou-kaiju-series.fandom.com/wiki/Ethan_Radcliffe?oldid=2140"
Community content is available under CC-BY-SA unless otherwise noted.