Emperor
Dictator of the Dinosaur Empire

His own power, dinosaurs, conquest, his empire

“Humanity is a mistake. They are weak, pathetic and cowardly. They are never meant to be. They are only a burden to the soil and the Earth that we, the dinosaurs, once ruled over with fierceness and power.”
—Gore

Emperor Gore (帝王ゴール, Teiō Gōru?) is the ruthless leader of the Dinosaur Empire, who wants to bring back the race of dinosaurs back to their former glory, and the primary antagonist of the first half of the anime The Hows of Me and Liliana.

Gore is a large bipedal Dinosaur Man with a mostly purple body, on his belly are subcaudal scales with similar patterned scales on his forearms. Compared to his manga counterpart, he has a more human-esque face that is colored turquoise including a visible nose instead of a snout. His eyes consist of pink sclera and black irises. Gore's head has a cobra like headdress with flaps going down the sides of his head. He also wears a cape that covers most of his body.

As Emperor of the Dinosaurs, Gore is dead set on reclaiming the surface as the empire did in the past. He is a ruthless warlord, using whatever means to achieve his goal, even in spite of the continuous failures his empire suffered at the hands and combined efforts of Tatsuya and Liliana. Gore is unforgiving of failure and of traitors, with the punishment being pushed into the earth's magma.

The Hows of Me and Liliana Edit

Gore is not the Emperor by name only. As his title suggests, he has feats superior to other dinosaur men and subjects within his empire. 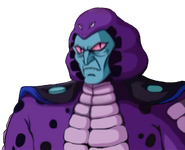 Gore in original proposed colors
Add a photo to this gallery

Retrieved from "https://mahou-kaiju-series.fandom.com/wiki/Emperor_Gore?oldid=3402"
Community content is available under CC-BY-SA unless otherwise noted.