Emperor
Ruler of the Hyakki Empire

His own power, oni, conquest, his empire

Emperor Burai (大帝, Burai Daitei?) was the sadistic and warmongering leader of the Hyakki Empire and the main villain in the second half of the anime The Hows of Me and Liliana.

Emperor Burai resembles a middle aged human with a pair of large antler-like horns extending from his head that features outgrown purple hair and a black beard and is always seen in a military uniform.

Burai becomes a warmongering and megalomaniacal warlord after his transformation into an advanced Oni, desiring to conquer the world under an iron fist. Driven mad with power, he sees all other lifeforms as below him.

The Hows of Me and Liliana[edit | edit source]

Burai is much superior in strength and abilities compared to every other Oni and has complete command over the entire Hyakki Empire. 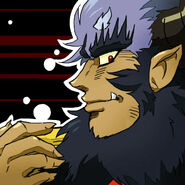 Fanart
Add a photo to this gallery

Retrieved from "https://mahou-kaiju-series.fandom.com/wiki/Emperor_Burai?oldid=5462"
Community content is available under CC-BY-SA unless otherwise noted.