Chizuru Nanbara (南原 ちづる, Nanbara Chizuru?) is one of the main characters of the anime All-Star Combattler V. She is the fourth and only female member of the Combattler Team and the pilot of the Battle Marine, which forms the legs of Combattler V. Later in the series, she becomes Hyouma Aoi's love interest and then girlfriend.

Chizuru is a youthful and attractive young figure who fits well with her slim and curvy body and large bust. She has sea-teal waist-long hair and blue eyes. Her pilot outfit is a pink leather suit with a skirt and white belt buckle, different-colored sleeves that is sometimes colored lime green, white or pink, yellow gloves and boots and the team's signature yellow "V" on the suit's torso area.

Chizuru is the gentlest and most compassionate of the team, but she is not above calling out nonsense from time to time.

Chizuru is the daughter and only child of the aging professor Takeshiro Nanbara and the fourth member to join the Nanbara Connection's Combattler Team. 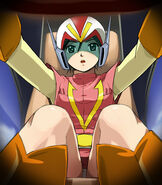 In winter clothes
Add a photo to this gallery

Retrieved from "https://mahou-kaiju-series.fandom.com/wiki/Chizuru_Nanbara?oldid=3898"
Community content is available under CC-BY-SA unless otherwise noted.