Viscount of Revia
Alchemist of the Underworld
Pink Flower Sage

“Even with such knowledge, the truth cannot be reached. But still, knowledge is growth.”
—Chevalier

Chevalier Dupant (シュヴァリエ・デュパン, Shuvarie Dupan?) is the prime alchemist and one of most prominent sorceresses of the Underworld. She first appeared in Kaiju World War: Part 1.

Chevalier is a woman of knowledge, interested in the sciences of the Underworld and collecting information, including ancient spells and rare items. She would be become more hooked on a quest to collect information by making more frequent visits and witnessing events on Earth.

Chevalier originated from the Principality of Revia and rose to the rank of Viscount, winning the favor of the Revian Princess Sera Leviathan. Her house is littered with ancient books piled up like a mountain. She studied magic for centuries and because of her knowledge and contributing to the technology of the Underworld Commonwealth, she became the most prominent alchemist of the Underworld. Although not very interested in fighting, those who disturb her research are relentlessly repelled with her ancient magic. Sometimes, she would go to outside realms, such as the human world, to capture rare books and creatures.

Recently, she has been interested in the various movements and events in the surface world, and has been visiting there more frequently. For that purpose, she has set up bases in dark towns such as Yomihara and Amidahara, and bring in a large amount of her books and research equipment. From his vast knowledge, she speculates that the Magi humans, such as those from the Justice Alliance or the Taimanin, may be the key to the truth of this world.

As the Pink Flower Sage
Add a photo to this gallery 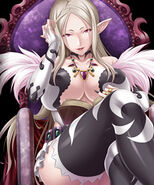 Retrieved from "https://mahou-kaiju-series.fandom.com/wiki/Chevalier?oldid=4008"
Community content is available under CC-BY-SA unless otherwise noted.