Interesting fights, trouble, getting money as a mercenary, fried meat

Being insulted for being a Naga, humans (initially), boastful people

“My name is Cerastes. The mercenary going with the flow. Pay me tightly and I'll go wild!”
—Cerastes

Cerastes (セラステス, Serasutesu?) is a Naga mercenary woman who would become an ally of the Taimanin in the Kaiju World War Saga.

Cerastes is a fighter who takes enjoyment from fighting in dangerous situations and thinks that mercenary employment next to death is a vocation. Her reaction of rejoicing when getting a new weapon come off as a bit childish.

For much of her life up until this point, she was incredibly hostile to humans, due to her trauma coming from being bullied and tormented throughout her childhood because of their prejudice towards demons, and she especially dislikes those who act mighty and high and those who throw up justice.

Cerastes is born from a high-ranking demonic race called the Naga. Currently, she performs mercenary business in the Earth's surface world. She was born in the human world, in a village in Belgium's capital city of Brussels and raised by humans, who were not aware that she is a Naga. She acted as a human with a mask that transforms her into her human form purchased from a physician. Because of her trauma of being despised as a Naga since childhood, she developed a strong sense of hatred towards humanity, especially those who stay high, and both the Justice Alliance and Taimanin are symbols of disgust to her.

She hears rumors that a clan warrior named Kariya is in the human world, and meets Kotaro Fuuma on a journey to find her. Normally, Nagas can transform into human forms by their own power, but Cerastes, raised by humans, rely on magic masks because she does not know how.

Cerastes is a very competent and tough fighter, thanks to both her experience as a mercenary and her physiology as a Naga.

She has large armored claws (装甲の大爪, sōkō no daisō?) that can deal heavy melee damage and fire finger missiles. 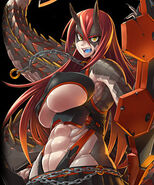 Retrieved from "https://mahou-kaiju-series.fandom.com/wiki/Cerastes?oldid=3867"
Community content is available under CC-BY-SA unless otherwise noted.