Making friends with humans, peace between Earth and the Underworld, concept of love and friendship, her friends and their loyalty/kindness

His uncle, drinking blood, harming humans, disorder and war, those who threaten her friends, kingdom and people, boredom

“Have you taken a look at the Underworld Commonwealth's crime rate, Kitae? Those idiots from NOMAD couldn't kill time.”
—Cara

Cara Cromwell (カーラ・クロムウェル, Kāra Kuromuweru?) is the benevolent queen of the vampires of the Kingdom of Vlad and one of the main characters of The Earth Defense Force.

Cara is an amiable and unwarlike vampire queen who expresses interest with interacting with humans. She considers them companions instead of food and also possesses no issue with working alongside them.

Like any good ruler should, Cara shows genuine concern for her people and kingdom, e.g. when they are danger of being in the clutches of the plans of her vicious uncle Gram. Another major instance is when she led her kingdom to oppose the Underworld Legion's invasion and subjugation of all life on Earth by forming the Vladian Pact with anti-Legion factions from the Underworld. Multiple occasions show that Cara legitimately wants to protect her nation and the Underworld from anything that could be a potential threat against it. As implied above, she does not seek to oppress the humans of the surface world.

Cara is known to be one of the most powerful vampires in the world, possibly on the same level as Edwin Black, if not slightly more of less. Therefore, she has abilities that make even the fiercest nobility of the Underworld fear. 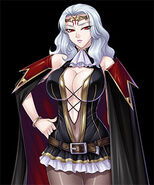 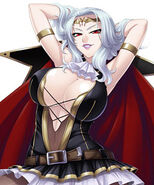 Retrieved from "https://mahou-kaiju-series.fandom.com/wiki/Cara_Cromwell?oldid=4393"
Community content is available under CC-BY-SA unless otherwise noted.