None (identified as Male)

Peace and order in the cosmos

Forbidden Gods and Final Gods, chaos in the universe

“Our friend's hopes and dreams are etched into its body, transforming the infinite darkness into light! Unmatched in Heaven and Earth! One being among the gods! Overgod of Light Bandaios! We will show you the power of humanity!”
—During Bandaios' debut

Bandaios (バンダイオス?) is the leader of the Ancient Gods and one of the most powerful entities in the Mahou Kaiju Series universe. He only appears in Kaiju World War: Part 2 to aid the remaining good forces of the universe in the war against of the Forbidden and Final Gods.

Bandaios is an extremely massive centaur-like entity with a torso, four legs and a dragon-like face. He has yellow glowing eyes, a long golden hair and red scales on his skin. He wears white armor with several colored gems on it, with the gems being mostly green, and a golden crown, also with multi-colored jewels. He also has two pairs of flaming wings, one at the back of his upper body and the other at the lower.

The Origin of the Universe Edit

Conflict Between the Ancient Gods and Forbidden Gods Edit

By merit of his sheer size, abilities and powers, Bandaios is one of the most powerful beings that ever existed in the Mahou Kaiju Series universe and even further, since he is a multiversal entity similar to the Final Gods. His title of "Overdeity" implies that his feats and strength are beyond even that of the strongest gods in existence.

Wielding Grand Chariot
Add a photo to this gallery 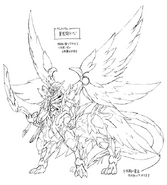 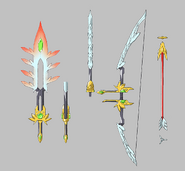 Concept for his weapon
Add a photo to this gallery

About to fire an arrow

Beside Grand Chariot
Add a photo to this gallery

Retrieved from "https://mahou-kaiju-series.fandom.com/wiki/Bandaios?oldid=4352"
Community content is available under CC-BY-SA unless otherwise noted.