“Take one wrong step on me and consider your ass kicked.”
—Azuma

Azuma Kamimura (神村 東, Kamimura Azuma?) is one of the major characters in the game Cara The Blood Lord.

Azuma is sexy young woman with a curvaceous body with a slightly-tanned skin tone, scarlet-orange hair with a spiky ponytail and purple irises on her eyes. She usually wears her black two-piece, revealing much of her upper body, along with a red jacket and grey jeans.

Azuma is a brash and impulsive woman who has a slight distrust against men, especially disdain against perverted ones, and a proud young delinquent who fights criminals out of leisure, takes pride with what she has and fights against the norms of society that she doesn't necessarily agree with. However, despite her seemingly off-brand personality, Azuma is a person who is willing to help others, especially weak people who don't have the power to defend themselves. 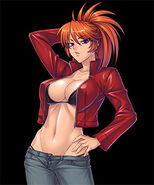 Portrait from The Earth Defense Force 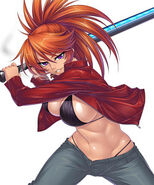 Retrieved from "https://mahou-kaiju-series.fandom.com/wiki/Azuma_Kamimura?oldid=3543"
Community content is available under CC-BY-SA unless otherwise noted.