“I have great expectations for your abilities.”
—Asagi

She is known as the most powerful Taimanin that has ever lived, granting the title of the "Strongest Taimanin" and the commander of all Taimanin.

Asagi is an attractive woman with big breasts that go with her sexy figure. She has long dark-blue hair and teal irises on her eyes. Her Taimanin outfit is entirely purple with silver armored accents across.

It is revealed that Asagi also has demon blood in her veins. This triggers when subjected to the emotional and sexual abuse to such a degree that it forces its way out and her inner demon, Kage, alters her appearance and strengthens her powers to an insane level.

After years of taking care of Kousuke, the man confesses to the Taimanin his love and she tries to reciprocate it. The following day, Asagi is on a mission in a rebuilt Tokyo Kingdom where she finds Oboro. She is horrified to learn that Gosha Academy has been utterly decimated and everyone in it are caputred. Even worse, Oboro reveals that she has Kousuke, turned into a ball of flesh by a demonic warlock during the attack on Gosha Academy, literally in her hands. Using Kousuke as bait, Oboro forces Asagi to surrender.

She is a female ninja of justice going against the demon people's heretical doctrine. She is a person who holds very heavy responsibilities and burdens, since she lost both of her parents early and now only has her sister Sakura. Ingenious at the martial art of fencing, she has speedily excelled her training, and is recognized from her achievements thus far as the strongest of those repelling the demon influence.

Her childhood friend, and her love, Kyousuke Sawaki, kept her father company as a pupil of his until he passed away. Above anything else, all female ninjas, like Asagi, walk among the scenes of carnage, and as such, believes that her duties always take priority, thus regards and acknowledges lovemaking as strictly taboo, and as such, Asagi is forced, much too often, to cast away Kyousuke's love. 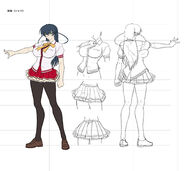 School outfit
Add a photo to this gallery 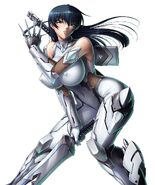 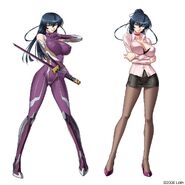 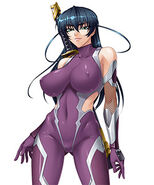 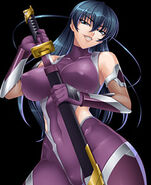 Retrieved from "https://mahou-kaiju-series.fandom.com/wiki/Asagi_Igawa?oldid=5797"
Community content is available under CC-BY-SA unless otherwise noted.