“Youth, I, Amane Fuuma, has been appointed to be your butler. Please, give me your orders.”
—Amane

Amane Fuuma (ふうま 天音, Fūma Amane?) is one of the supporting characters introduced in the Kaiju World War movies. She is the butler of the Taimanin Fuuma clan.

Due to her strong Evil Eye, Amane was rushed to the battlefield from an early age and spent a fierce childhood. Her own father, Gonjou, feared her, but Danjou greatly admired with her strength and raised her to a fighting machine with distorted affection. She has great knowledge in combat, and she usually works on organizational operations, but she comes into play when danger is at stake.

Similar to Danjou, she had undergone cyborg surgery in the United States and her left hand turned into a cyborg arm. This cyborg arm is a special one that works with her abilities, allowing her accumulated energy to be released as energy bullets through holes in the cyborg arm's palm.

Amane met Kotaro Fuuma and wanted to cooperate and co-work with with, much to the chargin of his half-sister Tokiko, whom she would often collide with.

She also joins the Justice Alliance under the superhero alias "Scarlet Eye" (スカーレット・アイ, Sukāretto Ai?), with approval of Kotaro, Tokiko and Asagi, believing that the demonic influences in Japan can be completely repelled if the Fuuma clan also has a foothold on the superhero organization that is slowly beginning to rise back up, which would then result in the unification of the Taimanin and the Alliance.

She used to be Kotaro's butler when he was a child.

As the butler of Fuuma clan and a Taimanin of her accord, Amane demonstrates her abilities to her fullest, which makes her a formidable force to be reckoned with. 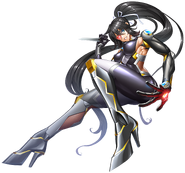 Taimanin suit
Add a photo to this gallery 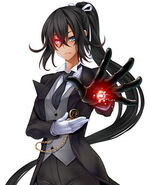 Retrieved from "https://mahou-kaiju-series.fandom.com/wiki/Amane_Fuuma?oldid=4331"
Community content is available under CC-BY-SA unless otherwise noted.