Her boyfriend Kouta and making him happy, jazz, melonpan

Bullies, monsters, men other than Kouta leeching at her

Aki Hayami (速水 綾希, Hayami Aki?) is the childhood friend and love interest of Kouta Kazama and a supporting character who, along with Kouta, would ascend to the role of tertiary main characters in the second half of the anime The Hows of Me and Liliana.

Aki is an attractive young woman in her late teens. She has shoulder-length hair with mahogany brown color and amber-garnet irises on her eyes.

Background (The Hows of Me and Liliana) Edit

Aki is Kouta's childhood friend and has always been his neighbor. She attends in the same school as he does, along with their friends Tatsuya Nagare, Nozomu Sunohara and Shiori Takanashi. Her parents and Kouta's parents have been friends since long before they were born, so their two families have always been very close. Aki is a very sweet and cute girl, her popularity with boys is incredible, just like with girls. She doesn't seem very receptive to Kouta but in reality she has realized longer than him that they were of the opposite sex.

That's why she starts to panic when she learns that Kouta and her family will come to live with them for two weeks, to her mother's great joy.

Gamera vs. The Dark General Edit

In love
Add a photo to this gallery

With Kouta at school

Taking photos together with Kouta

In a dressing room with Kouta

With Kouta, in their bedroom

Aki whispers to Kouta
Add a photo to this gallery 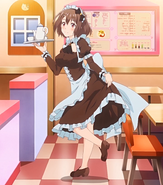 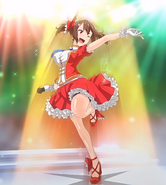 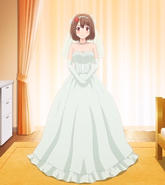 Bride
Add a photo to this gallery

Retrieved from "https://mahou-kaiju-series.fandom.com/wiki/Aki_Hayami?oldid=4710"
Community content is available under CC-BY-SA unless otherwise noted.