Justice in the city

Ai is a curvaceous young woman with a slim and fitting physique, evident with her pale skin, wide hips and large bust. She has silvery-white long hair and blue irises over her eyes.

Her battle outfit is a blue skintight suit on her torso and legs, with transparent coverings on her arms and thighs. It has a silver collar and boots.

Miwako Sawamoto is the biological mother of Ai.

It is soon revealed that Banjo Haran is Ai's half-brother who shares the same father as her's.

Her body is enhanced with nano machines giving her superhuman abilities and the ability to metalize her limbs as weapons. 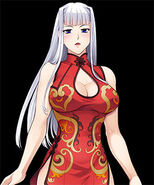 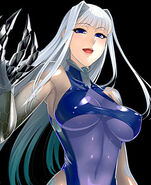 Portrait from Kaiju World War: Parts 1, 2 and 3
Add a photo to this gallery

Retrieved from "https://mahou-kaiju-series.fandom.com/wiki/Ai_Fujisaki?oldid=5429"
Community content is available under CC-BY-SA unless otherwise noted.