Errors in her database, enemies of the Earth

Artemis-66 Luna, also shortly known as A-66 Luna (－６６・ルーナ, Ē-66 Rūna?), is a semi-artificial lifeform produced by the Earth Defense Force. She first appears in the film as a minor character in the film Kaiju World War: Part 1 and becomes a major supporting character in the anime Young Braves Brigade.

A-66 Luna is young preteen girl with brown irises on her eyes and long light-purple hair with shades of sky-blue and pink in many parts.

Because A-66 Luna was programmed primarily in combat against the Earth Defense Force's enemies, emotions and other concepts that human beings can comprehend are purged. Therefore, initially, she did not at all reveal emotions and behaved indifferently. She had no awareness that her emotions are being suppressed, and she had no doubt that she is a fighting being, merely created to fight in the battlefield to destroy her creators' enemies.

However, this changed when she was damaged in combat and found offline days later by the Young Braves Brigade to be repaired. After days of fighting alongside the Brigade, she begins to question why humans feel emotions even in the field of war and wonders if she can experience them if she is an android.

The A-66 Luna is a human-cyborg weapon created to control the latest energy weapon of the US branch's Earth Defense Force, the Artemis. She is the 66th and completed for the first time. About 40% of her body is mechanized. The rest is the same as a real human being, and her reproductive function remains, but she did not know it.

She was damaged critically during a battle between the US Armed Forces and the Underworld Legion in Merida, Mexico and rendered offline after crashing to the ground. She was found by the Young Braves Brigade during their exploration in Mexico, taken back in their ship and repaired. After restoring consciousness, she immediately reacted and nearly attacked the Brigade before Kenta and Connor calmed her down.

Her strength and fighting prowess are sure subjects of awe, regardless of the enemy she faces.

The purpose of A-66 Luna's creation and modification is to wield one of the Earth Defense Force's most powerful portable weapons, the Artemis (アルテミス, Arutemisu?). 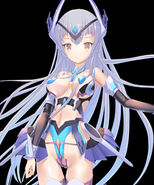 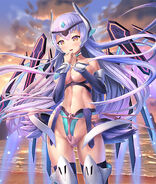 In love
Add a photo to this gallery

Retrieved from "https://mahou-kaiju-series.fandom.com/wiki/A-66_Luna?oldid=5425"
Community content is available under CC-BY-SA unless otherwise noted.